Appleworm™ Orchard acquired its first Pumpkin Hulsey flock several years ago from Greenfire Farms, when it sold its broodflock to make room for another importation of an endangered layer from Europe, or some other distant clime.  Our starter flock was wonderful, being composed of Linus, a stunning pumpkin-feathered cock hatched in early 2011 by Lisa Diane Smith of It’s Game Time Farm and several Larry Carter hens bred by Larry Hardy of the Marsh Creek Game Farm.  Linus’ mother was a pure-bred Larry Carter hen with dark plumage and his father an unrelated Pumpkin Hulsey with white plumage.

Since our first Pumpkin-Hulsey purchase, we have bought and examined many more specimens and now maintain six Hulsey flocks.

One of these is led by Linus’ son, Homer, a straight-combed, white-legged, pied ginger-and-white cock.  In 2014 he was penned with two Duke Hulseys (bred by James Coyle), a beautiful white Pumpkin, and our very best hen (Lucy, one of Homer’s half sisters).  In 2016 he is being penned with but two hens, Lucy, and another one of his half sisters, Pinkie. 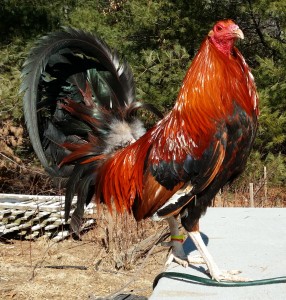 Another is a Duke Hulsey flock, constituted exclusively of fowl bred by James Coyle.  In late 2015, Mr. Coyle retired and sold us the core of his Duke flock.  This flock has an august pedigree.  Mr. Coyle acquired his stock from his father, who had acquired it from the Duke himself, way back when.  We were deeply flattered when Mr. Coyle offered us the opportunity to curate this line.  The stud of our Duke flock is Mephisto, a sturdy red-toned cock.  Three of the hens are pure white; the fourth is white with orange hackles.  We were very pleased by the results of the 2015 crossing of Homer over two Duke hens we had previously bought from Mr. Coyle.  We are eager to see what they toss with Mephisto as their mate.

Upon his retirement Mr. Coyle also sold us his two, complete Larry Carter flocks.  Mr. Coyle acquired his broodstock from Mr. Carter in 2006 and, since then, maintained two families (with occasional infusions from Mr. Carter), one that produces large birds with pronounced strength and another that tosses smaller, speedier fowl. 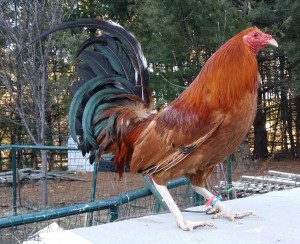 In 2015 we penned Mustafa, a scion of the speed line with hens from both the strength and speed lines.  In 2016, now that we have acquired all of Mr. Coyles’ broodstock, we are maintaining these two lines as Mr. Coyle did.  The “power” pen is ruled by Narcissus (a.k.a. Pretty Boy); the speed pen by Hermes.  If we find the time to build additional pens, we will also do some select single-mating.

We also have two project flocks, both having at their core fowl acquired from Larry Hardy. In the first of these flocks, we have two hens that came directly from Mr. Hardy and a stud, John Brown, the son of one of these hens and Spartacus, a cock also bred by Mr. Hardy.  John Brown is a high-stationed, yellow-legged, pea-combed cock; the hens have, respectively, white and green legs.  Mr. Hardy’s breeding preference is to ignore leg color, comb type, etc. in favor of agility and disposition.  While we are sympathetic to this preference, we do give some weight to these other matters, so will attempt, with time, to bring this flock back into conformity with conventional standards of appearance.  Our plan is to produce, by line-breeding John Brown to these hens, fowl that consistently throw high-stationed, yellow-legged birds.  At the end of the 2016 breeding season we will, therefore, offer to the public the core hens and, at a discount, any resulting stags.  The process will repeat until we get true-breeding birds. 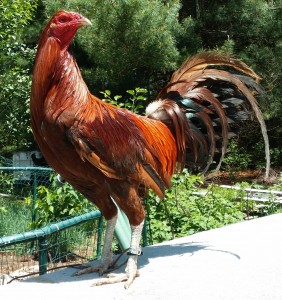 Our other project is to create a flock that produces stags that resemble Stilts, full brother to Spartacus. Stilts is a magnificent cock.  He weighs about six pounds, has a very high station, and is extraordinarily powerful.  All who handle him praise his physique.  He does, however, have some superficial defects: his comb is pea and his legs are steel blue.  In 2016 we are penning him with a few straight-combed, yellow-legged hens.  Our goal, with time, is to produce stags that partake of his stature and power but conform better to breed standards.