The Blue Isbar is a chicken with three striking virtues.  First, it is a beautiful bird.  Every day we are impressed by the plumage, stature, and gait of our principal stud, a blue-feathered rooster.  Second, the hens lay gorgeous eggs.  The medium-large, green eggs are a wonderful addition to our multi-colored basket.  Finally, the  breed is exceedingly cold-hardy.  In February 2015, when the night-time temperatures in New Hampshire were consistently below zero and the wind chill frequently below negative 20, our elderly hens — not just the pullets — kept on laying.

The Isbar also has at least two weakness.  The first is that the birds are not consistently pure-bred for the blue color that underlies the green egg.  We discovered this from the fact that an occasional hen lays brown eggs.  This indicates that her mother was heterozygous for the blue-egg trait — it is dominant — and the father was at least heterozygous — and possibly homozygous — for the the recessive white-egg trait.  This defect is not significant, as the recessive white gene can be bred out.  In fact, we are currently working with one particular hen, a layer of very dark brown eggs — eggs as dark as our Marans — to create from her a line that has both two blue-egg genes and the dark-egg “paint.”  If we succeed, the egg color from this family will be outstanding.

The more significant weakness is this: The Isbar does not have a very resistant immune system.  We discovered this with our very first juvenile pair, purchased Fall 2013 from a very reputable breeder.  When the temperatures dipped and many of our birds experienced respiratory distress (remember, it is very cold in New Hampshire), the pair died.  We replaced them with other birds from another breeder.  They died too.  The process repeated itself, with less extreme results, with other purchases.  One year and several thousand dollars later, we had a stabile and healthy flock.

The importer of this breed, Greenfire Farms, had simultaneously come to the same conclusion.  It sold off the broodstock it imported in 2011 and imported, in 2013, a new line from a different source.  Greenfire now sells chicks exclusively from this line. 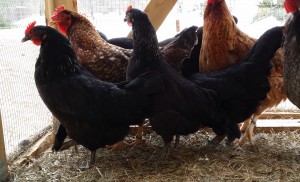 Our experience with this new line is that it is better than the 2011 import, but hardly perfect.  We have bought from Greenfire many chicks from the 2013 line and have found that, while hardier than the first, they are still susceptible to barnyard pathogens that other chickens can easily withstand.  Several dozen chicks led to only four brood-worthy hens.  The chickens are also inconsistently sized, tending mostly to the small.

Appleworm has, therefore, chosen to take its Isbar flock in a different direction.  Instead of abandoning the 2011 import, we have decided to deliberately cross-breed it with the 2013 line.  We now maintain two flocks: The first is composed of several hens from the 2011 import and a stunning blue rooster from the 2013 line.  All of these chickens have survived several waves of disease and are, in our opinion, extraordinary hardy, given the general deficiencies of the breed.  Our goals with this flock are to improve its hardiness and egg color.  The second is composed of birds exclusively from the 2013 import.  Our goal with this flock is to increase the size of the hens.  These birds can also be used as foundation stock for further 2011/13 crosses.