Appleworm™ Orchard is pleased to be able to offer for purchase some very nice Cream Legbar pullets. Cream Legbars were created in post-WWI Britain and first imported to the United States in 2011 by Greenfire Farms.  Appleworm acquired some of these birds at that time.  We discovered, as did many other breeders, that birds forming Greenfire’s initial flock failed to conform to some of the English standards.  Several notable failures were floppiness in the roosters’ combs (they should be upright), gold in the hens’ breast plumage (it should be salmon), and small or non-existent crests on the females.  Subsequent Greenfire importations made large strides in correcting these shortcomings . . .  and we bought birds, both from Greenfire and from breeders around the country, including Greenfire’s most recent importation, its birds from Jill Rees. Most recently, in December 2014, we bought the entirety of two of Greenfire Farms’ flocks: its “B-Line” and “C-Line.”  (Greenfire discontinued these two flocks to focus on its Rees line.) 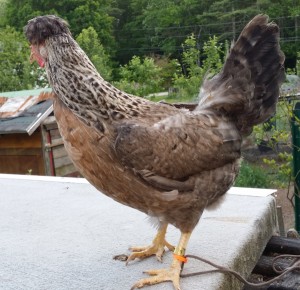 Our initial intention had been to compose two flocks, one consisting entirely of Jill Rees’ birds, the other of the best from all of Greenfire’s other imports.  But, after observing all of these birds, we concluded that we did not like the appearance of the Rees roosters and that this line was considerably less hardy than earlier imports.  So we don’t have a Rees flock.
What we have done instead is to compose two flocks from our various birds. For one of these, our smallest, our goal is to breed for hens that conform well to the breed’s plumage standards.  At the present time, we are selecting for crest size and color. Once those traits are true-breeding, we will move onto others.  The hen pictured on this page was hatched in early 2015 from this line.  To this flock we have given the name Punnett Square in homage to the man who created the auto-sexing chicken.

In the other flock (called “Wessex”) we are directing our attention to the color of the hens’ eggs.  We desire that the eggs be large, spherical, and very blue.