The Marsh Daisy is quite rare, but the black variety is especially scarce.  And delightful to watch.  The birds are very spry: Whenever they break out of their breeding pen — and they are always eager to do so — they choose to roost on the fence-rails and branches nearby.  They come home, of course, but not without a show.  They are also very productive and hardy; they are regular layers of medium-sized, chalk-white eggs and are extremely healthy. Almost all of their eggs hatch and mortality among the young is almost zero. 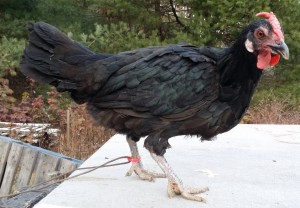 There is, unfortunately, a cosmetic defect with the flock we acquired.  The breed standard — for all five color patterns — calls for a crestless bird.  When Greenfire began working with its black flock, it chose to “breed up” the crest with the result that the youngest generation is mostly crested. There are, fortunately, several birds in our flock with no or slight crests.  (The photo on the right is of one of our crestless hens.) From that core, we plan on breeding the crests out.  In several generations we hope to eliminate that trait. 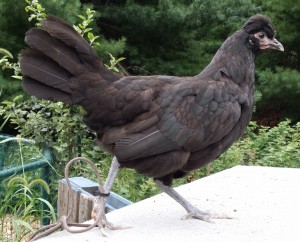 For the time being, all that we can offer for sale is crested birds, though in due time we plan on releasing true-breeding crestless specimens.  (The pullet to the left is an example of the birds we are currently selling.)