In late 2014 Greenfire Farms decided to discontinue breeding several of the poultry lines that it had, in previous years, imported and developed.  Appleworm Orchard was offered the opportunity to buy these breeds. We jumped at it.  So, in December, between final exams and Christmas, we found ourselves flying to Florida and carefully combing through these birds.

One of the breeds we decided to bring home was the Golden Duckwing Sulmtaler. Greenfire had at that time three roosters and about fifteen hens of this variety.  (It chose to keep the other strain, the Wheaten Sulmtaler, and continue its work with it.)  With Greenfire’s assistance, we selected the most handsome rooster and the prettiest four hens to bring home with us to New Hampshire.  (We sold the remaining birds to two friends.) 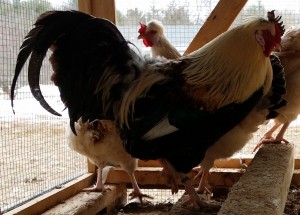 The Sulmtaler is a calm and majestic bird. The male has classic duckwing patterning on its low, large, and solid body; the female, for her part, has off-white plumage in her breast, light brown feathers on her saddle, and an S-shaped comb atop a white crested head.  Her eggs are long, white, and plentiful: Every day in April we predictably collected four large eggs from our four-hen pen.

Unfortunately, we have recently been too busy to take photos that might demonstrate the beauty of the birds.  We hope to find time in the near future to do so.  For now, we hope these photos will suffice.