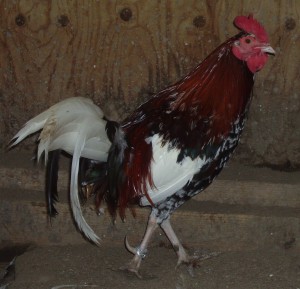 In addition to our Hulseys and Flarry Eye Greys, Appleworm™ Orchard has a select trio of Morgan Whitehackles.  Its acquisition, like many of our others, was an accident.  In early 2014, we were contacted by a “neighbor,” a gamefowl breeder on New Hampshire’s seacoast, whose Whitehackle broodpair had been exceptionally prolific, asking about our interest in buying it and its offspring. 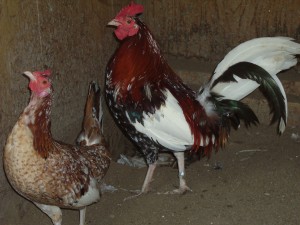 We looked them over and were greatly impressed with their hardiness.  Winter 2013-14 was very harsh and many of his birds of other breeds had lost combs and toes, but all the Whitehackles — every single one — had these appendages intact.  We concluded that these birds would make a nice additional to our gamefowl project: beautiful birds that could survive well on New England’s free range. Next thing we knew, we owned his broodpair and their offspring: In total, seven cocks and six hens. Over several months we observed these birds carefully and culled the flock down to a trio: the original broodcock (4lbs, 13oz), the original broodhen, and one of their daughters.  We later concluded that we preferred the mother over the daughter, so reduced the flock down to a single pair: Julius and Pompeia.  At the end of 2015 we added a daughter, Julia, from that year’s hatch to the broodpen.

Posted to this page are some photos of Julius and Pomeia.  As time permits, we will attempt to take some better pictures of these birds.