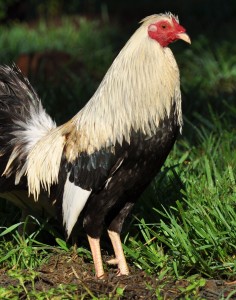 Leopold: Founder of our Flock

In addition to our Hulseys and Whitehackles, Appleworm™ Orchard maintains a pair of Flarry Eye Greys.  Our acquisition, truth be told, was a felicitous accident.  In Fall 2012 we purchased from Greenfire Farms a very nice flock of Pumpkin Hulseys.  Greenfire was, at that time, eager to make space for a new import of an endangered laying hen from Europe or some other distant place.  Noting our apparent interest in American gamefowl, Greenfire offered us, at fire-sale prices, its breeding flock of Flarry Eye Greys.  We did a bit of research, learning that Greenfire’s source, a breeder in Mississippi, had maintained his flock of birds for over a decade and that he had acquired his stock from a man in Indiana (who had worked with them for two decades).  Sounded good. 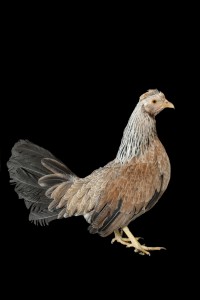 So we bought the flock, started breeding, and posted photographs of the broodstock to this website.  And we started getting calls.  Very interesting calls.  From all over the country.  Some callers simply wanted to let us know that these birds were very fine.  Others offered us lots of money to buy out the flock.  Others told us that we had mislabeled them, that they were not just “Flarry Eye Greys” but highly desirable “Joc Wilson Flarry Eye Grays.”  (The evidence of this, they said, is the birds’ white legs.)  Others said that they were not Flarry Eye Greys at all but “Ginn Greys.” (The evidence: lack of a Cro-Magnon-looking protuberance above the eyes.)  They might also be, possibly, “Ginn x Joc Wilson Greys.”  We were so confused. We still are confused.  But we are learning.  We continue to breed them, watching their offspring carefully.  We are doing our research, too, trying to trace their genealogy.

Loeb: Son of Leopold.  He is now our broodcock

Even though the original broodflock consisted exclusively of white legged birds, approximately half of their offspring have blue legs.  Our plan is to attempt to breed this recessive trait out of the flock: Our goal is pure-bred, white-legged birds.  So, until we achieve this goal, we will be retaining all white-legged birds for ourselves, but will offer to the public our blue-legged offspring.  Below is a photograph of one such pullet.

For additional photos of any one of these birds, along with information regarding their genealogy etc., please click on the photos above.