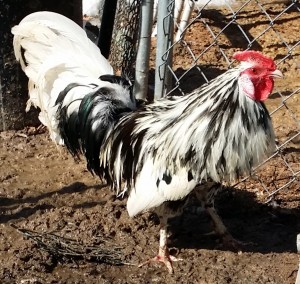 We have cared for Orusts since December 2014 and very much like them. We have found them to be (as befits a Scandihoovian chicken) cold hardy and (as advertised) good foragers. In the latter category, however, Greenfire seriously undersold them. They are phenomenal foragers. Into all of our breeding pens we toss first-cut hay, both for the chickens to play with and also for food. In many pens, the hay is soon covered by a thick layer of dung. Not so in the Orusts’! Their incessant churning of the hay and scat produces a fine and useful compost. If you are serious about using a chicken tractor to till your garden, this is the bird to populate it with. 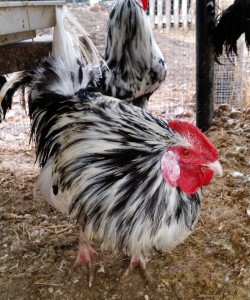 The Orust is not without its deficiencies. We noticed a high incidence of crossed beaks in the chicks, both in the stock we acquired from Greenfire and in the chicks we have hatched, but this problem has disappeared as we have curated our flock.  Moreover, the males or, better said, our principal male, Adolphus, are very aggressive. Appleworm knows all about fiesty birds, as our hands and forearms bear scars from the various poorly trained gamecocks we have acquired over the years. We suspect that Oroosters, like gamecocks, can be tamed by handling. So, if you really want to breed these birds, be prepared to commit yourself to a long-term personal relationship with the smallest stud of your life. Finally, several of the Orusts’ distinctive traits are not true bred: Their legs are occasionally yellow, not white, and the Indian-corn patterning in some is not as pronounced as we would like. 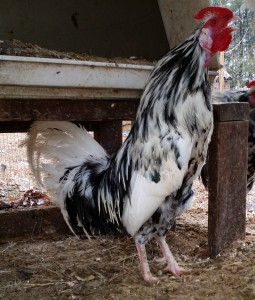 To mitigate some of these flaws (crossed beaks, depressed vigor, and yellow legs), we have aggressively culled our stock and are avoiding brother-sister mating. Our flock began in December 2014 with three yearling roosters pulled from Greenfire’s broodpen (all hatched from the eggs that Greenfire imported in 2013) and about 18 chicks sired by their brothers. We culled our three roosters down to one — an exceedingly vigorous specimen — and selected the three best pullets grown from that initial clutch. As their chicks hatch, we dispatch those with crossed beaks; as they grow, we cull those that fail to thrive; and, once leg color becomes apparent, we find the yellow-legged pullets new homes.

The photos on this page are of Adolphus, named after the bellicose Swedish monarch (Gustavus Adolphus), our Bavarian great-great-grandfather (Phillip Adolph Zang), and the evil Austrian with the silly mustache. 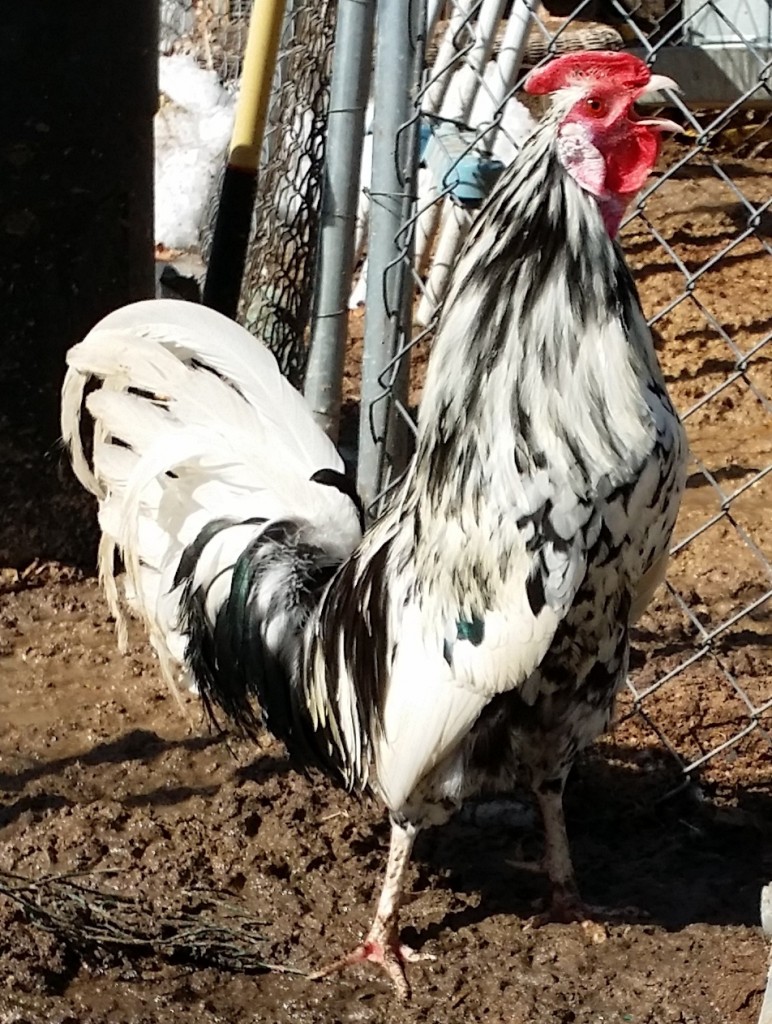